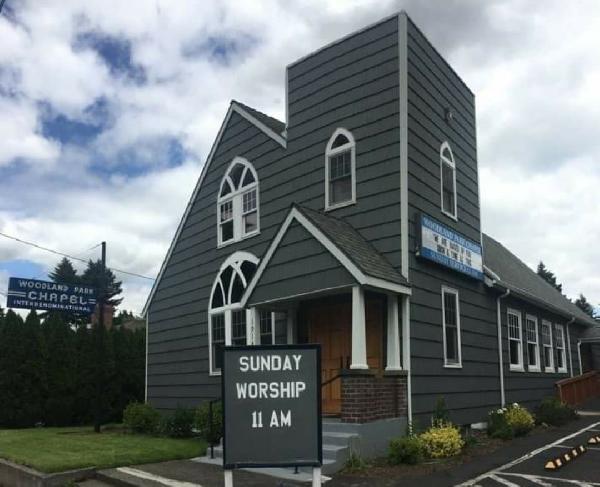 Welcome to Woodland Park Chapel (WPC), a non-denominational Bible church located in the Gateway area of northeast Portland, Oregon. We are affiliated with an organization that originally started out as the American Sunday School Union (ASSU) in 1817, later called American Missionary Fellowship for many years, and is now called InFaith.

In the mid-1930s the Lord laid a burden on the heart of the Henry Motz family to build chapels in East Multnomah County -- an area that was largely unchurched at the time. Woodland Park Chapel was the second of five chapels built, and it had its first worship service on Easter Sunday, April 1st, 1945.

Arnold Motz served as pastor of Woodland Park Chapel from the mid-1950s until 2013.

Today, Woodland Park Chapel is undergoing renewal and growth and continues to be used by the Lord to call people to faith and to serve the Gateway area of Portland with Christ-centered, Biblically-based, Mission-minded ministry.

Woodland Park Chapel is led by a team of Elders who have the primary role of being pastor-shepherds. Because WPC is a community of faith in Jesus Christ, all decisions are made as much as humanly possible, through unity as a validation of the leading of the Holy Spirit. Major decisions are handled with Elder-proposed and Congregational-confirmed approach, as we are led by the Holy Spirit to be the aroma of Christ in every place.

then 'Add to Home Screen'